Why is it that the overwhelming majority of bargaining disputes & strike action is about job security? Because insecure jobs remove the dignity of our labour Workers deserve security Workers deserve respect And we’re going to fight together in solidarity until we win it

Solidarity with Toll members who are on strike. The whole union movement is behind you. #TruckieSolidarity

2/2 McCain @mccainglobal needs to stump up and offer proper sick leave provisions (120 hours). What kind of company is stingy with workers during a global pandemic. #FairDealForMcCainWorkers

It was great to pop into the @aeutasmania office where the @theamwu Tasmania Branch were having their State Conference today to show a bit of love for a publicly funded (not privatised!) #TAFE on #NationalTAFEdaypic.twitter.com/PObCJ0EHrZ 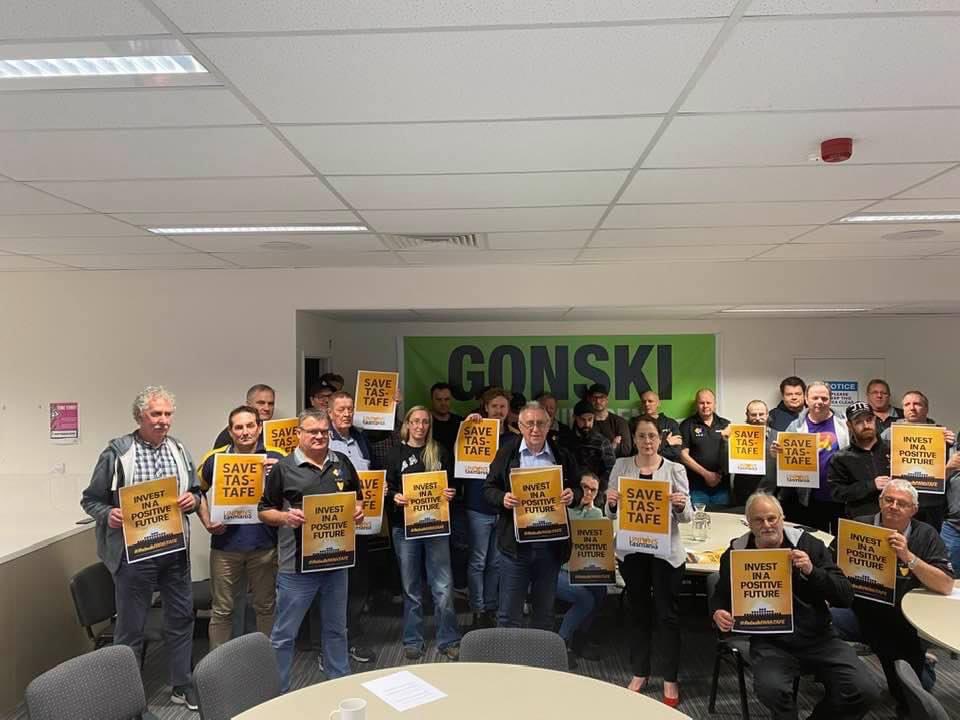 .@theamwu has successfully challenged a Fair Work decision that backed the right of employers to lock out workers ­before they took legal industrial action. @australianhttps://www.theaustralian.com.au/nation/fair-work-rules-employer-lockout-unlawful/news-story/b10ede2340ba373416987f1d8bd084be …

Essential food workers and the AMWU have not been properly consulted over SPC’s demand for workers to be compulsorily vaccinated by November. The timeline is problematic and the company needs to legally consult with workers and their union.pic.twitter.com/uYGqgPQ2XK

The Fair Work Commission heard our appeal and found McCain Food's lockout of our workers in Smithton, Tassie was unlawful #FairDealForMcCainWorkerspic.twitter.com/uwSkDRQzdC

In an incredible show of solidarity, the fund for AMWU members at McCain in Smithton, Tasmania has now topped $10k! Big, big thanks to every person who chipped in and/or spread the word. You are all wonderful and your support is very appreciated.https://bit.ly/3lz1keG

Today we were in the Commission appealing a decision that it was lawful to lock McCain workers in Tassie out before they had taken any action. If allowed to stand, this case would cut at the heart of the right to strike and bargaining in good fair #FairDealforMcCainWorkersin

Dodgy tactics by @mccainfoods who've tried to tell reporters today that our appeal hearing at the Fair Work Commission was cancelled. #FairDealForWorkers

BREAKING: Community and Union pressure has seen McCain now back down on their lockout of @theamwu members in Smithton Let’s hope they also back down on paying workers in Tassie less pay than on the mainland 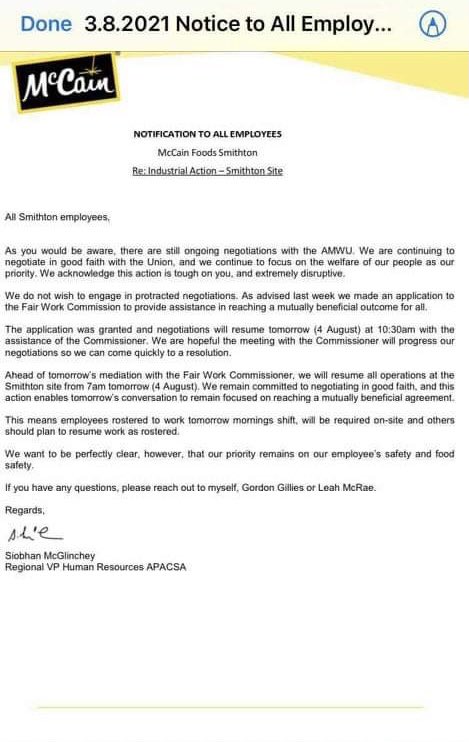 The FWC decision on #McCain goes against the advice on their own website This decision, if allowed to stand, will reshape the way employers & employees conduct themselves during bargaining If workers threaten industrial action= bosses can lock workers out to starve them

.@theamwu is challenging a Fair Work ruling that backed frozen food giant McCain locking out workers before they took industrial action. Legal experts believe the decision will further limit the right of workers to strike if allowed to stand. @australianhttps://www.theaustralian.com.au/nation/unions-appeal-ruling-backing-preemptive-lock-out-of-workers/news-story/3ffd278ad68b52de1826e1e299e3f4e9 …

When your employer locks you out, you play football and stand around the fire pot.pic.twitter.com/FUQOumYGF1 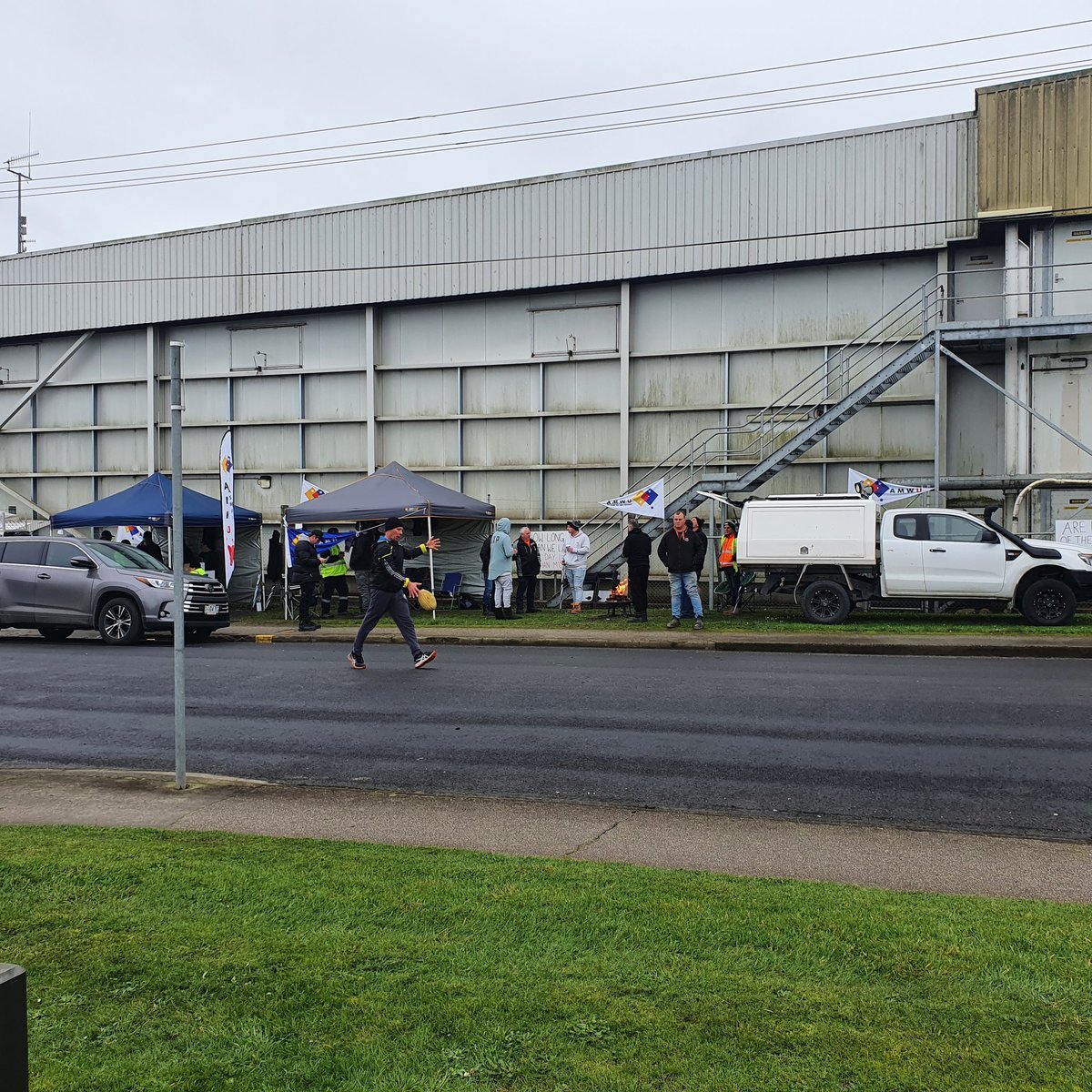 Here’s our state secretary John Short on coffee and scone duty as the lockout in Smithton continues. #FairDealForMcCainWorkerspic.twitter.com/RBOS30Zu4U

Every bit counts. Thank you to “You’ve Done It Again” for your $4. #FairDealForMcCainWorkers https://chuffed.org/project/support-mccain-tassie-workers …pic.twitter.com/toFIFMpa8x

And …. wake up today and your generosity is overwhelming. Thank you! You’ve donated over $6000 to the workers in Smithton, Tassie who’re still locked out my corporate multinational McCain!https://chuffed.org/project/support-mccain-tassie-workers/?fbclid=IwAR06UGrklk3Byx8vUBE-GWQuesstu9WtzAOGIRwvIsISpkYxMFF3f3elOlM …